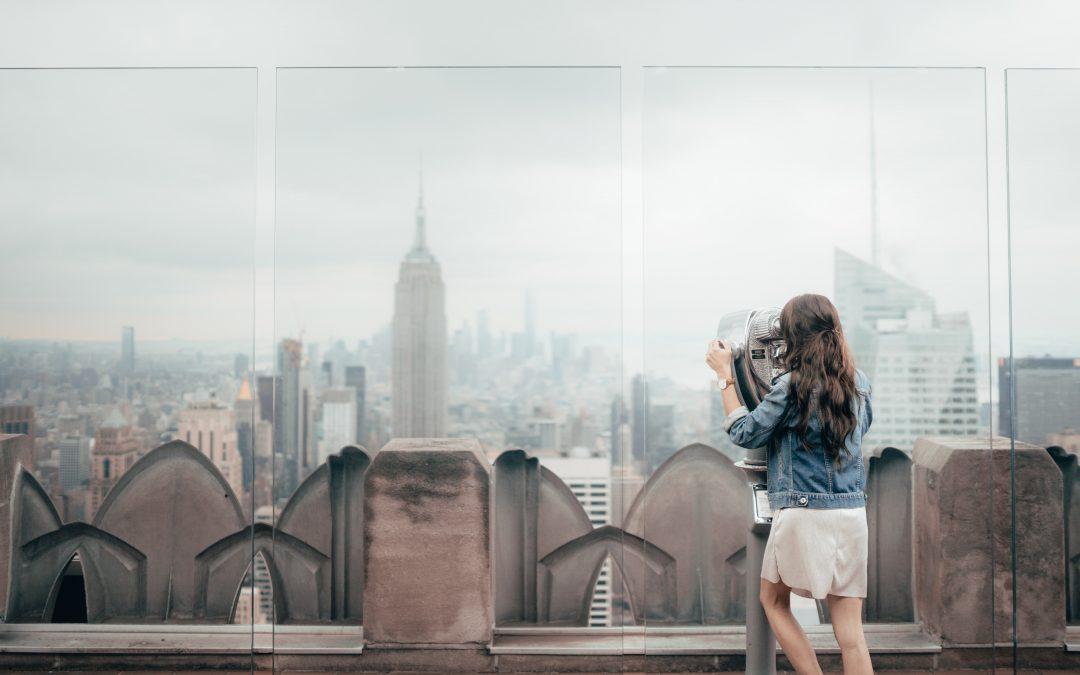 The city of New York is vibrant and diverse. In addition, it is a city of politics, business, and culture. New York City, one of the most populated cities in the US, is even referred to as the economic and cultural center of the world. Let’s say you are travelling to NYC, visiting this marvelous city for the first time and want to have the NYC experience; we prepared a list for you!

The gleaming New York skyline would be virtually unimaginable without the renowned Empire State Building. The 1,454-foot skyscraper is a famous example of Art Deco construction that took over 400 days to complete physically. Although it is no longer the tallest building in New York, it maintained that distinction for several years when it was finished in 1931. Enjoy the three levels of lights on the topper, which can display up to nine different colors at once, and don’t miss the building’s lightning rod at the top, where you could really see sparks fly.

On Liberty Island, in Upper New York Bay, is where the Statue of Liberty is situated. It is a historically significant building and an enduring image of democracy and freedom. The monument is arguably the most well-known in the entire globe. This famous landmark serves as more than simply a tourist attraction; it serves as a warm welcome for immigrants who come to America in search of possibilities. The spiral stairway from the lady’s feet to the crown comprises 162 steps and is also a UNESCO World Heritage Site. A wonderful and overwhelming experience, climbing to the Statue of Liberty’s summit offers views of the harbor, lower Manhattan, Brooklyn, the Verrazano Bridge, and Staten Island.

3- The Metropolitan Museum of Art

Sprawling is an understatement when it comes to this Manhattan institution: One of the few places in the city where you could spend a full day and just view a small portion of the holdings is here. There are 17 curatorial collections, ranging from modern photography to prehistoric Egyptian treasures, hidden behind the doors of this renowned neoclassical building. Explore the vast collection of musical instruments, swords, and armor or the Costume Institute’s centuries of wearable art if you want to satiate your anthropological curiosity. And for devoted museum visitors who have traversed the permanent collections—a commendable feat—special displays demand yearly trips. Recent blockbusters have included Picasso’s artwork and addressed the late designer Alexander McQueen’s career.

In this unique, multi-block complex, you’ll discover a feast of New York landmarks; in fact, the bottom floor alone is home to the tourist-heavy ice-skating rink, the bronze Atlas monument, and the “Today Show” plaza. In terms of expansive city vistas, Top of the Rock matches the Empire State Building higher up.

Times Square, often known as “The Crossroads of the World,” is situated in the heart of Manhattan at the junction of Broadway and Seventh Avenue. For more than a century, Times Square has been a favored tourist destination. You won’t find anything like the spectacles in Times Square anywhere else. Times Square is a favorite location for locals and visitors alike because to the flashing neon signs, the music coming from the trendy clubs and bistros, and the large number of people who swarm the Square all year long.

The fifth largest but most popular park in the US is Central Park, which is situated in the Manhattan borough. This is because of the enormous variety it provides. The park features many floras and animals, including small running rivulets, stone bridges across streams, grasslands, towering trees, lakes, meadows, and woodland sections.

It is common to see people riding horses in carriages, cycling, and driving through sporting facilities, concerts, and bicycle tours. Public transportation has good connections to most areas. There are 21 playgrounds throughout the park. Favorite observatories include those in Columbus Circle, Charles Dana Discovery Center, and Belvedere Castle.

Lower Manhattan in New York City’s Financial area is where Wall Street is located. All financial professionals and fans are attracted to Wall Street. This 1.1-kilometer-long boulevard has the New York Stock Exchange, a recognizable structure in the world of finance, and one may take a tour of it. A sculpture of a charging bull is used to illustrate a bullish financial market. This street tends to be more upscale because it is home to some of the most advanced financial structures in the whole globe.

After visiting all these gorgeous places and spent in the streets of NYC, the best thing to do would be grab an original New York style pizza, where it is commonly eaten standing on a paper plate. The most authentically New York slice is this one. Crisp, thin crust crushed canned tomatoes as sauce, and low-moisture mozzarella as cheese are the characteristics of classic New York slice pizza.

After having a delicious piece of pizza, now it’s time to end this NYC journey sweetly and what is better than a creamy New York style cheesecake? Anywhere in New York City, take a taxi and request to be taken to the city’s greatest cheesecake. It’s likely that you’ll wind up at Juniors on the corner of Flatbush and DeKalb Avenues in Brooklyn. The greatest cheesecake in New York is served at Junior’s famous restaurant, which Harry Rosen founded in 1950. People from Brooklyn (and other parts of New York) have flocked there for decades to eat, joke around, and fight over cheesecake.

Another alternative to check before you leave NYC is Italian Restaurants. Check them before you go.

Do not forget that besides the place you decide to go to, the accommodation is another critical part of budget traveling. Holiday Swap allows its users to book, host, and swap homes with anyone around the world. It enables swappers to find each other and helps them save money on accommodation that they could spend on flights, meals, activities, and more. Apart from home swapping, the app also offers its users the opportunity to host other travelers at their places and earn in-app tokens, which they could spend on staying at other travelers’ homes worldwide.